This is the first of several anticipated postings about new interpretations of the various stucco sculptures associated with Palenque’s Temple of the Inscriptions.

First the piers of the upper temple. 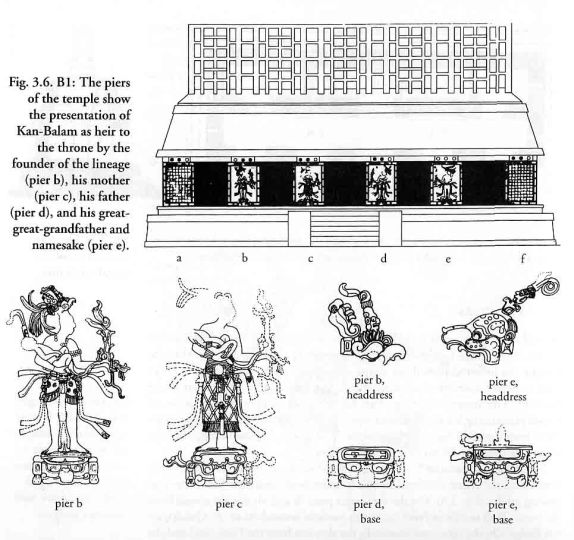 The last published interpretation of the piers appears as Chapter 3 in The Code of Kings, by Linda Schele and Peter Mathews (1998). I’ve reproduced their illustration above, which nicely summarizes their thoughts on the identities of the four standing figures on Piers B, C, D and E. Flanking the central doorway are a female (Pier C) and a male (B), both of whom are heavily damaged. The outer portraits are somewhat better preserved, showing key details in their headdresses. As has been known for many years, the figure of Pier E, at far right, wears a fused snake-and-jaguar helmet, clearly a name glyph corresponding to Kan Bahlam, “Snake Jaguar.” Schele, Mathews, and many others (myself included) have equated him with Pakal’s distant predecesor Kan Bahlam I.

The headdress on Pier B is also fairly well preserved, although I was recently very surprised to see that all previously published drawings are innacurate in many important details. My own sketch of the head of the Pier B figure is reproduced here above, based on a careful examination of the Maudslay photograph taken in early months of 1890. This portrait exhibits is another name glyph headdress, identified by Schele and Mathews as the lineage founder K’uk’ Bahlam I. However, the details of the photo, as indicated in my sketch, clearly show it to be a peccary head with an infixed k’an cross in the eye. This can only be K’an Joy Chitam, the name of another early ruler of Palenque as well as the second of Pakal’s sons.

I take the woman and man on the innermost piers (C and D) to be a wife and husband pair, possibly Ixtz’akbu Ajaw and K’inich Janab Pakal, or alternatively Pakal’s parents, Ix Zak K’uk’ and K’an Hix Mo’. I see no way of choosing between these options, but I doubt there are other possibilities to seriously consider. As earlier interpretations have suggested, the outer figures, now identifiable as K’an Joy Chitam and Kan Bahlam, could represent earlier royal ancestors, but I now believe another possibility is well worth considering. The two outer figures on Piers C and E may also be portraits of Pakal’s two important sons, one of whom (K’inich Kan Bahlam or Kan Bahlam II) oversaw the completion of the Temple of the Inscriptions. This king is named prominently in the interior tablets of the temple, as well as in the surviving portion of the long stucco text on Pier F. Both of Pakal’s sons were well into adulthood at the time of their father’s death, and I suspect their portraits on the piers, possibly in the company of their deceased parents, helped convey a strong sense of dynastic continuity.

My next post (Part II) on the Temple of the Inscriptions stuccoes will focus on the infants cradled by each of the four figures, widely interpreted over the last few decades as images of the deified K’inich Kan Bahlam.