This post offers a few speculative thoughts on the glyph shown at right that’s long eluded any firm decipherment, but which for many years now has been thought to refer to an important type of ritual object or space, such as an altar or shrine. In fact, in the epigraphic literature of the past couple of decades it has often simply been glossed as “stone altar.” Here I would like to offer a somewhat different interpretation and suggest that it might better be interpreted as a term referring to a more specific sort of object known as an effigy incense burner. These remarkable and ornate ceramics are elaborated vessels, with lids that assume the form fully three dimensional portraits of historical ancestors or deities. They have been found at a number of sites, perhaps most notably at Copan, Palenque and Tikal, often in funerary contexts. It is clear that these elaborate objects were imposing ritual props, even sometimes nearly monumental in scale. 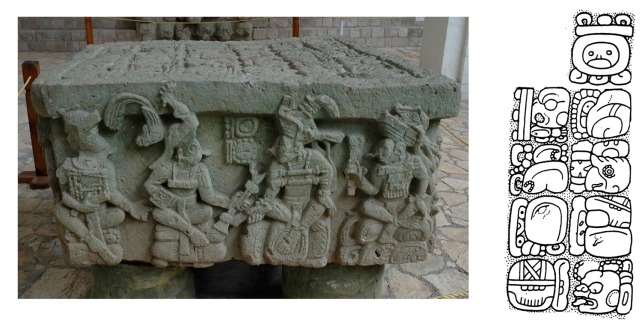 Fig. 1. Copan, Altar Q, with upper text passage noting the dedication of an object associated with the dynastic founder. (Photograph and drawing by D. Stuart)

We begin with the famous Altar Q at Copan (Fig. 1), a large box-shaped stone commemorating the dynastic founder, K’inich Yax K’uk’ Mo’, and his royal successors. The inscription atop the altar is best known for mentioning of the arrival of the founder, but toward the end we come to the record of then-contemporary events, including the dedication of an important monument or object under the auspices of Ruler 16, Yax Pahsaj Chan Yopaat.    Interestingly, this item was “owned” or pertained to K’inich Yax K’uk’ Mo’, by them deceased for nearly four centuries.  The glyph for this object (ya-?-la) has long eluded decipherment, but we have always assumed it stands in reference to either the altar itself, or perhaps even to the pyramid before which Altar Q was placed, Temple 16. In any event, it is important to note that the elusive term is for some sort of commemorative “thing” that is “of” K’inich Yax K’uk’ Mo’.

Fig. 2. Opening section of the Temple Inscription from Str. 10L-26 at Copan (Drawing by D. Stuart).

The same glyph appears again at Copan on the Temple Inscription, from the upper shrine of Structure 10L-26, the temple of the Hieroglyphic Stairway (Fig. 2). There, in beautiful full-figure glyphs, we read of another fashioning (the verb pa-ta-wa-ni at block a4) of the same class of object on 9.13.14.0.1 5 Imix 4 Kayab, and that it was “of the lord” or “of the lords” (ya-?-la-AJAW at block a6). This reference is vague, but given the parallel with Altar Q we might speculate that the term again refers to an ancestor or collectively to a group of ancestors. Importantly, Structure 10L-26 was also a major funerary monument at Copan, built by Rulers 13 and 15 above the tomb of Ruler 12.  Ruler 12 died on 9.13.3.5.7 and was placed in his tomb 14 days afterwards. The funerary stairway above the tomb was built by his son many years later on 9.13.18.17.9, possibly in association with the Esmeralda construction phase of the pyramid.  But the question is: what was made or dedicated in connection with this temple four years before the stairway, and over a decade after Ruler 12’s death? A building? An altar? No evidence exists of a major construction episode in 10L-26 between the times the tomb was placed and the large Esmeralda pyramid and its stairway were built above it, suggesting that the area around Ruler 12’s tomb was very accessible for a number of years. At any rate, the pattern suggests also that the glyph in question is probably not an architectural term (like “shrine,” for example).

A third occurrence of the same glyph perhaps appears in another Copan temple, Structure 10L-11. There it appears on the west jamb of the temple’s north dorrway in connection with the date 9.16.18.2.12 8 Eb 10 Zip, again with a “make” or “fashion” (pat-wan) event.  In this case, its “owner” is named as Ruler 15, who died some six years earlier and who may be buried under Temple 11’s superstructure.  Here once more we find our mystery term associated with a verb of “making” and owned by an ancestral figure.

Moving from Copan to nearby Quirigua, a similar pattern seems to be at work. The inscription of Zoomorph P records the Period Ending 9.18.5.0.0, at which time the local ruler “scatters incense” at a temple called the “13 Kawak House” (Fig. 3). This is in all likelihood one of the principal buildings in Quirigua’s acropolis, directly behind (to the south of) the monument (According to Zoomorph G this same “13 Kawak House” is where the great Quirigua Ruler K’ahk’ Tiliw Chan Yopaat was buried). The Zoomorph P inscription goes on to say that the incense ritual (chok ch’aaj) was performed on or with regard to the “object” of K’ahk’ Tiliw Chan Yopaat, as well as, it seems, with the same “object” of Ruler 13 of Copan. This is a remarkable statement, for Ruler 13 had earlier been the war captive of K’ahk’ Tiliw Chan Yopaat and was sacrificed at or near Quirigua in 736 A.D., decades before the zoomorph itself was dedicated in 795. Here, both the Quirigua king and his illustrious prisoner were associated with the same type of commemorative object mentioned three times at Copan, and again we find it in direct association with deceased kings and ancestors.

Turning to Palenque, we find that the same hieroglyph occurs in the tablets of the Temple of the Inscriptions, in the passages that record complex dressing rites associated with the three gods of the Palenque Triad. Chief among these was the tying of paper-cloth headbands (sakhu’n), headdresses (ko’haw) and jewels (tup) upon what must we can only presume to be effigy figures of the these deities, as Martha Macri (1988, 1997) and others suggested some years ago. A summary statement of the rites appears near the beginning of the west tablet (Fig. 4), where we have the simple mention that:

Fig. 4. Passage pertaining to the "headband-binding" on effigies of the three gods of the Palenque Triad. PAL, TI, west, B3-B6. (Drawing by L. Schele)

Here once more the glyph in question is a possessed noun associated with venerated figures, in this instance the gods of the Palenque Triad.

So what can this glyphic term actually mean? A few telling clues stand out thus far:

(1) The glyph must somehow refer to a class of commemorative object associated with deceased ancestral figures as well as deities.

(2) It can be “made” or “fashioned,” as revealed by its association with the verb pat.

(3) Specific actions associated with this object involve ritual dressing with paper-cloth (Palenque) and adornment with headgear and jewels. Significantly, they are also in some manner involved in incense rituals (Quirigua).

(4) The term has close ties to funerary temples at Copan and possibly at Quirigua, in direct connection to historical ancestors.

Taken together, one is tempted to think that the glyph refers to ritual statuary or figural representation, and perhaps more specifically to effigy incense burners. Such objects are known in Maya archaeology of course, perhaps the most spectacular examples being the ornate figural incensarios unearthed near Ruler 12’s tomb at Copan, inside Structure 10L-26. These objects were dressed and bejeweled (note the ear holes, etc.), and as burners were obviously used in important incense rites. The Copan censers represent all of the kings up to and including Ruler 12 himself, and so they fit well with the pattern of ancestral commemoration. And use of the verb pat would seem appropriate for this sort of object, given its known meaning in connection to the manufacture of ceramic objects (Yukatek pat kum, “hacer ollas”). And as we’ve seen, the mention of the “fashioning” of our mystery object in the Temple Inscription of Stucture 26 seems in some way to be connected with Ruler 12’s tomb. Might it specifically refer to the making of these effigy incensarios? It’s a tantalizing connection to ponder.

So, some general conclusions and speculations:

– Altar Q at Copan may refer to the dedication of an effigy censer in the form of the great ancestral ruler K’inich Yax K’uk’ Mo’. If so, the altar itself was likely intended as a pedestal or platform for its display, in front of his funerary temple.

– Copan’s Structure 10L-11 refers to the manufacture of a possible effigy censer of Ruler 15.  This was perhaps intended to be displayed on the platform in the center of the north-south passageway of the temple, framed by the snake-centipede “maw” carved into the wall at either side.

– Quirigua’s Zoomporph P refers to the incense rite involving the effigy censers of two historical figures: K’ahk’ Tiliw Chan Yopaat as well as Ruler 13 of Copan, in association with the former’s funerary temple in the acropolis.

– In the case of Palenque, I suspect that some local variety of deity censer was mentioned in the Temple of the Inscriptions, each representing one of the Triad gods and ritually adorned as part of the calendar ceremonies performed by K’inich Janab Pakal.

With Structre 26 of Copan, the making of the “? of the lord(s)” may well refer to the censers discovered outside of Ruler 12’s tomb (Fig. 5). The rather anonymous and general ajawterm seems unlike any other example discussed, leading me to think it is a collective reference to the twelve ancestors. My tentative conclusion is that the Copan effigy ancestors were made collectively on 9.13.14.0.1, and that they together served for a few years as important objects of ritual veneration, perhaps at the site of Ruler 12’s tomb or somewhere else in the acropolis.  At the time of the construction of Esmeralda, these were terminated around the tomb’s exterior, and buried in the construction fill for the more grandiose funerary temple that the son had designed for his father.

I’ll close with a brief word on the glyph’s possible phonetic reading. The main clue in the decipherment of the central compound sign is its ya- prefix, a clear indication that the possessed noun begins with the vowel a-. The -la suffix on the glyph likely marks a -Vl ending on the possessed noun, so we ought to look for a noun root that begins with the vowel a- and fits this semantic context, having some connection with burning, incense, or effigy forms.

The element atop our mystery glyph (T174) is part of a main sign that still resists a firm phonetic decipherment, but it is important to note that the same element also appears with another logogram (T174:T704) with the value SABAK or SIBIK, “soot, ash” — a reading proposed a number of years ago by Nikolai Grube. Interestingly, another widespread Mayan term with much the same meaning is abak, “soot, charcoal, ash.” I do wonder if the logogram at the heart of the supposed “effigy” glyph might eventually prove to be ABAK, producing ya-ABAK-la, for y-abak-al, “its soot.” The semantics might have been extended somewhat to include the containers for burnt offerings, in the forms of ash-filled effigy censers. A different possibility worth considering is that the ya- sign prefix signals the presence of the agentive prefix aj- before a still obscure root, so that the possessed noun referring to effigy figures is aj-?.

The phonetic reading still remains elusive, yet the semantic domain of the noun in question seems much firmer in its connection to effigy figures and burners, ritual objects that were of great importance in ancient Maya ceremonial practice.

Maya Decipherment is a weblog devoted to ideas and developments in ancient Maya epigraphy and related fields. We welcome contributions and the participation of colleagues and students from around the world. For more details, please look at the "About" page.