Some years ago, I posted a blog suggesting a distinct pattern in urban form among the ancient Maya. This was an alignment in which ballcourt alleys pointed towards royal interments (Houston 2014, Deathly Sport). Another example now comes to mind. A fine map by George Bey and William Ringle shows the location, at Ek’ Balam, Yucatan, of the ballcourt at the site. A reference to that feature may appear in the local texts, in Room 29sb, Mural B, yet the preceding, partly effaced sign, …bu, probably cues a stairway, ehb. Ballplay sometimes took place on such features.

Here is my photograph of the much-restored ballcourt (Figure 1), followed, in the next image, by the Bey/Ringle map (Figure 2).

Figure 1. Ek’ Balam ballcourt, with alley pointing toward the “Acropolis” at the site (note thatching over tomb building, top-center; photograph by Stephen Houston). 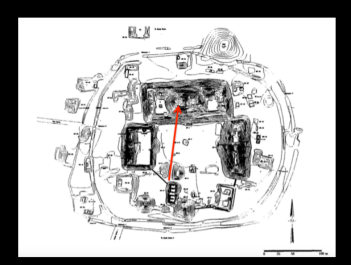 Figure 2. Map of epicentral Ek’ Balam, with arrow added for orientation and sight-line towards tomb (cartography by George Bey and William Ringle).

The skewed alignment, headed not towards the center of the Acropolis but to an area just west of its main axis, transports the gaze to the location of a spectacular tomb. That grave was found under Room 49 by Leticia Vargas de la Peña and Víctor R. Castillo Borges. To my knowledge, the tomb has not been published in full. But, as shown by Alfonso Lacadena (2004), it surely belonged to the principal lord of the site, U Kit Kan Lehk (the final word of his name is insecurely transliterated).

There are as yet no detailed publications on the relative chronology of these features—did the ballcourt come before the tomb or after?  Nor do I have any precise readings from a Total Station, as that would have given (or refuted) a more certain alignment. But these buildings may well add to the growing evidence for links between ballplay and the illustrious dead.