The Maya region abounds in reptiles: by one count there are as many as 240 distinct species in Guatemala alone. It would not be surprising, then, if the Classic Maya took note of them and even mentioned some in their writing. The references could even be exalted, extending to royal names or to those of high nobles. At Bonampak and sites nearby, a ruler (or two) went by the name AJ-SAK-te-le-se/TELES, Aj Sak Teles, “He, the White Lizard” (see Tokovinine 2012:65, also Bonampak Stela 1:K1 [Figure 1A]), Stela 2:G4, Lintel 3, A9 (Figure 1B), Bonampak Structure 1, Room 2, East Jamb:A1–B1 [Miller and Brittenham 2013:240], and Dumbarton Oaks Panel 2:D1-C2, L4-K5 [Figure 1C, Mathews 1980:figs. 2, 3, 7]). This term may be linked to its label in Tzotzil, teleš, for Basiliscus vittatus, a crested lizard with the surprising ability to run at a good clip over water (Laughlin 1970:335; note, however, that the compiler of this dictionary sees it as Spanish in origin, from “Andrew,” perhaps a doubtful surmise). Another lord on a late vase from Señor del Peten (or “Nuevo Veracruz”), Quintana Roo, reveals a second lizard name, also equipped with a color designation (Cortés de Brasdefer 1996): AJ-YAX-to-lo-ki?, Aj Yax Tolook, “He, the Green/Blue Lizard” (Figure 1E, see also K3026, CHAK ch’o-ko KELEEM ‘a-*la-tzi to-lo-ko 4-‘e?-*k’e? [Figure 1D]). This appears also to be a kind of basilisk lizard, tojrok in present-day Ch’orti’–for some reason, the puréed brains of this reptile appear to have been used for medicinal purposes (Hull 2016:410).

Another lizard name, probably also for a basilisk–was there no end to their wonder for this creature?–has recently come to light. Excavations by Tomás Barrientos, Marcello Canuto and their team at La Corona, Guatemala, recovered a remarkably preserved, all-glyphic block that the project has labelled “Element 56” (Stuart et al. 2015). Dating to April 9, AD 690, the block provides one of those minute clues, seemingly insignificant but indispensable for decipherment, that enliven and advance Maya epigraphy.  The clue appears in the name of a local ruler who was the younger brother of the preceding ruler. His name contains much of interest: CHAK-AK’, “Great or Red Turkey,” a distinct lizard head, then ku-yu, kuy, probably for a kind of owl (for discussions of these readings in other contexts, see Grube and Nahm 1994:703–704; the AK’ is suggested by an ‘a-k’a spelling at pB4–pA5 on La Corona Panel 3, in a piece held by the Israel Museum, #B95.0149, K5865; other uses of the turkey head for AK’, often without the full wattle [a hen rather than a gobbler?], come to our attention on Caracol Stela 6:C12, ya-?AK’-wa, Dos Pilas Stela 1:B2, AK’-ta-ja, and Palenque, Temple of the Inscriptions, Middle Tablet:M6, ya-AK’-wa).

Such chains of animal names appear with celebrated personages like Kaan-Bahlam of Palenque. At La Corona, this lord’s name included two birds (the turkey and owl) and what is, to judge from its scutes and scaly skin, a reptile of some sort. La Corona ran the gamut of such references, including rulers named after a cricket, snake, and dog.) The relevant clue to the reptile is the ti syllable inserted underneath. Ordinarily, this would hardly signify, for any number of words might end in a t, with varying vowel complexity depending on the word.

But here we can draw on another “substitution set,” a sequence of signs that helps to establish controls even if the overall meaning remains opaque. This sequence embroiders several texts, most from the Early Classic period, two come from the city of Yaxchilan, Mexico, another from Caracol, Belize (Figure 3). An unhappy truth for Maya epigraphers is that we can sometimes read the sounds being spelled by signs but can not, to any persuasive degree, grope towards their meaning. So is it with this set: ‘i-ti pa-ti yi-pi ya-je-la (the ‘i alternates with a vulture plucking out the eye of a dog, perhaps some onomatopoeic name for such birds). Clearly, at least at Yaxchilan, the set forms part of a lavish string of fuller names and titles employed by certain rulers. 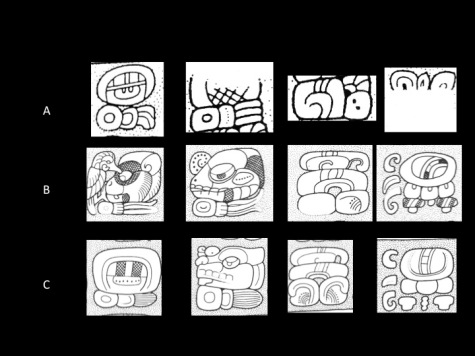 The mystery of what this sequence might mean cannot be solved at this time. What is of immediate concern are the two reptile heads in place of the pa-ti. By standard, and warranted, epigraphic supposition, one alternates with the other, and the ti surely serves as a syllabic complement to a CVC or CVCVC word sign. Paat or pa’t, from the disharmonic ti, yields welcome results: a basic source on Ch’orti’ Maya, the target language for most decipherments, gives us “ah pat, lagartija (small lizard, probably the newt, or e’t)” (Wisdom n.d., though we doubt the “newt” identification), and a yet more complete compilation, by Kerry Hull, supplies “ajpat. anim. largato, largatija. lizard” (Hull 2016:41). These terms are securely cognate with a range of words for “lizard” or basilisk, ix=pa7ch or ix-pa’ch in more conventional phonological notation (Kaufman 2003:641; note that Terrence Kaufman derives the word from Mije-Sokean languages, a link that, if it exists, must have gone far back into the Preclassic period). To this Yukatek adds: (ah) pach “lagarto coronado con cresta y macho” (Barrera Vásquez et al. 1980:616). The internal glottal stop relates anciently to the vowel complexity attested in the Classic spelling. Most of these terms probably connect as well to words for “back, spine,” paat or paach, depending on the language. In syllabic form, the name materializes in the area of Lacanha or Bonampak (Figure 4): a lord from that area went by yi-ch’a-ki pa-ti, Yich’ak Paat/Pa’t, “Claw of the Crested Lizard,” on Piedras Negras Panel 2, and another figure, attested on an unprovenanced altar at the Art Institute of Chicago, was called a-ku[lu] pa-ti, Ahkul Paat/Pa’t, “Turtle-ish Crested Lizard” (AIC #1971.895). 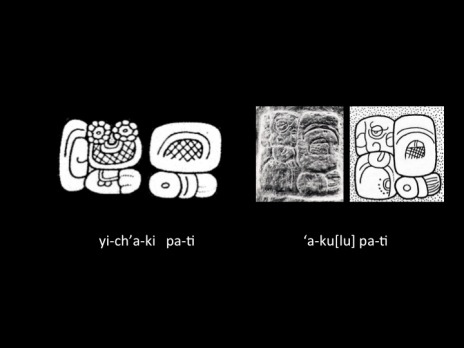 This crested lizard, probably some variant of a basilisk, figures in a number of images (Figure 5). The most elaborate shows an enigmatic scene in which two reptiles are being brutalized by black-painted figures, one caparisoned as a water bird–a digging stick seems to serve as a weapon for one tormentor, while the other slings rocks. A miserable-looking crocodile sits nearby on a throne, his arms bound around his back. Evidence of a feast–a tamale bowl and pulque vase (see the white froth)–complete the image, although the reptiles do not appear to relish the moment. Has a party been interrupted, will they be included, after suitable butchering and cooking, as part of the meal?

The link of basilisks and drinking bowls marks one final image, on a late 6th-century, early 7th-century bowl from Altun Ha, Belize (Figure 6).  The lizard with flowery ornament on its brow long tail and dotted crest occurs in a watery scene that also contains the sign for musk or mead, the latter perhaps being the more likely connotation (cf. Figure 3B, 3C above; for another sign of musk or mead, Pendergast 1990:fig. 152a).  Leaning over slightly, his arm rises in servitude–was this tied in some way to the tableau of torture, either as prelude or epilogue?  Many of these bowls display pizotes or monkeys, the creatures most likely to poach succulent cacao pods, or they highlight birds of a pleasant, watery world (see Taube’s contribution to Ogata et al. 2006).  Whether any of these associations explain the royal name at La Corona remains a subject for future thought. 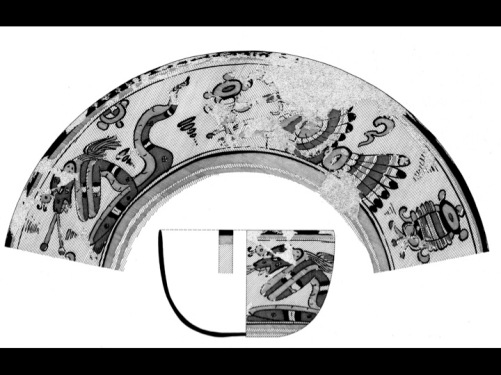 Acknowledgements  Warm thanks go to the Universidad del Valle and Tulane teams, directed by Tomás Barrientos and Marcello Canuto, for granting access to the La Corona panel.

Grube, Nikolai, and Werner Nahm. A Census of Xibalba: A Complete Inventory of Way Characters on Maya Ceramics. In The Maya Vase Book: A Corpus of Rollout Photographs of Maya Vases, Volume 4, edited by Justin Kerr, 686–715. Kerr Associates, New York.

Ogata, Nisao, Arturo Gómez-Pompa, and Karl A. Taube. 2006. The Domestication and Distribution of Theobroma cacao L. in the Neotropics. In Chocolate in Mesoamerica: A Cultural History of Cacao, edited by Cameron L. McNeil, 69–89. University Press of Florida, Gainesville.