A fraternity of animals awaits visitors to the Museum of Fine Arts in Boston. There, on a page of the Indian epic, the Rāmāyaṇama, monkeys and bears gather as part of Rama’s army, soon to attack Rāvaṇa, his mortal enemy (Figure 1, Jain-Neubauer 1981:55, fig. 21). Commissioned in the early 1700s by some Rajput prince, the miniature had a devotional use, but it also served to entertain and instruct, as revealed “on special occasions” to “the eyes of connoisseurs” (Jain-Neubauer 1981:9). The lateral flow of events is consistent with these paintings. Yet there, in grinning vignette, a monkey peers out at us. His bear and monkey companions are quite stolid by comparison, for the most part looking stiffly at the enemy fortress to the left. A few stroke and clutch each other in worry or maybe they yearn to claw their way into battle.

The grinning monkey has broken the “fourth wall.” He has penetrated the divide between those inside a text, image or performance and those outside. In a sense, the spectator has become a participant. Shakespeare deployed this effect in various plays, as did Thornton Wilder in Our Town and Martin Scorsese in Goodfellas. The director Konstantin Stanislavski, father of “method acting,” and a fixture of avant-garde productions from my college years, used it to rethink modern theater.

Literary theory and cinematic studies might see the fourth wall as a “meta-reference,” an actor’s awareness that he or she exists within a work of art. There are others, those outside, who look on. As the wall crumbles, they are coaxed into the “storyworld” of a text or image (Kukkonen 2013:65), and a particular time, space, and frame reach out to enfold the viewer. The results may vary, but one can imagine responses like empathy, surprise or amusement. There is another subtlety too. In the Indian miniature, viewers may believe this is a flat painting, no monkeys present. Yet, in a word devised by the philosopher Tamar Gendler, they alieve that world of bears and heroic kings to be true and accessible (Gendler 2008). We see the monkey, and he sees us. Most likely, of course, viewers know there is no assembly of animal warriors. They are happy, however, to suspend that notion, the better to immerse themselves in the story. People can feel and believe several things at once.

Most Maya narrative images are of distinct if related storyworlds. In them, the viewer is distanced, a witness at best. [Note 1] There are exceptions, to be sure, ones that transport the spectator across the fourth wall. A monkey might look out from a perch on a mythic mountain, as cheeky as any Rajput beast, or an owl from under the bed of a cuckolded god. Indeed, owls are often shown this way. Perhaps the Maya did so to emphasize their sight or to evoke the en face conventions of the distant city of Teotihuacan [some of the earliest glyphs with frontal owls occur in personal names linked to that far place]; Figure 2A, B). Other figures are human. One is a tortured captive looking out plaintively in an image where everyone else seems to ignore the viewer (Figure 2C). By implication, the people in charge could not care less (to my mind, Maya art hints at a faint sense of disdain for the viewer, almost a devaluing of their status [but see Note 1]). Another presents a high-ranking subordinate who spells out gesturally, with fussy precision, how such minions should pose (Figure 2D). Even his hat is slightly risible, and the image in general expresses an important record of one major kingdom abasing itself before another.

The frontal view of a face or body as a sign of misery is hardly common in Maya art. But it does appear as a consistent theme after the first years of the Late Classic period. And there is so much misery to go around: a gutted captive (with wispy mustache?), takes time from his agony to peer through the fourth wall (Figure 3A); a sacrificial baby lies uncomfortably on its belly, face contorted to the viewer (Figure 3C); a possible captive lolls his head, a bound figure just barely visible to the right (Figure 3D); and a cuckolded god of the hunt languishes–is he ill?–while a deer carries off his probable wife (Figure 3E). Among the few glyphs with such faces is the head of a dead person with eyes closed, mouth in a rictus (Figure 3B, final sign). 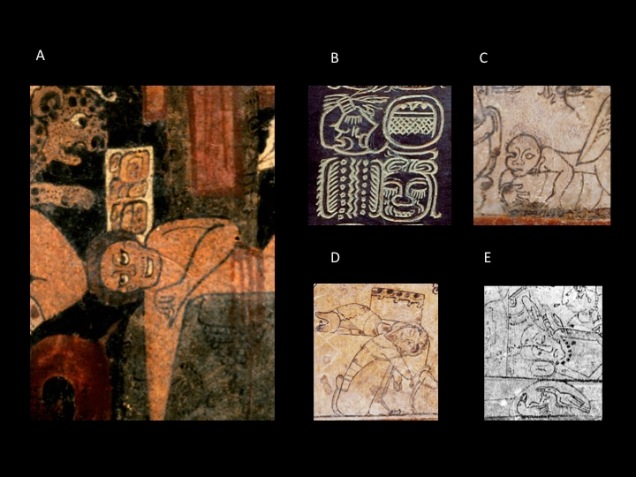 The convention does not just appear on pottery. Panel 4 from Piedras Negras intensifies the discomfort by showing a captive who not only looks out at the viewer but hangs his head upside down, a frequent position for trophy heads on warrior’s bodies (Figure 4). Mary Miller pointed out to me long ago that Maya artists had a far freer and more innovative hand in playing with depictions of captives. Logically, those bodies were also the way to experiment with displays of emotion (Houston 2001). Was there a hint of pity in these images or was it simply Schadenfreude?

Accentuating the frame of a scene–or escaping its limitations–brings up an important feature of Maya imagery. There is a sustained intent to preserve and maintain clarity, to be complete and also, with texts, completely legible or viewable. Yet a change occurs in the visual culture of the Maya during the AD 600s. A fascination seems to grow for the ocular experience itself, with what the eye can see from a particular vantage point, with how materials respond to gravity, a body mass slumps, a cloth folds and wrinkles, how feathers wave to wind or movement. Has sketching begun, practices analogous to the minute, preparatory observations by Dürer or da Vinci of a certain textile or flexed hand? This ocular culture, if it can be described as such, engenders a kind of illusionism, a playful interest in implying the existence of glyphs behind images, bodies that move out of frame but are still held to exist off-frame. The viewer both believes (we presume) that there is no such body but, in Gendler’s term, alieves it be present. A captive’s body or foot goes off frame, in carvings by the great master Mayuy (Figures 5A, B), but the convention also operates in painting (Figure 5C).

In glyphs there is a witty and demanding lack of clarity, a game played with the reader who must fill in the missing parts. This is especially clear in two areas of production: the school of painters around the western side of Lake Peten Itza in northern Guatemala (involving the so-called “Ik’ site,” identified by titles clearly applicable to a number of different places in that region), and another to the north, in association with the powerful dynasty of Calakmul (Figures 6 and 7). The patterns tend to be that verbs (ak’oot) or titles (kaloomte’) get occluded or, on one vase (K1256), a bit of blood-soaked paper extends from a way spirit to the very glyph for way. The painted texts on clothing in the Bonampak murals show the same illusionistic game. They combine belief and alief, emphasizing what the viewer’s (or painter’s) eye can see (Miller and Brittenham 2013:230, Captions I-5B, I-5C, I-6B). This is not only on paintings, but, as on a panel at Dumbarton Oaks, the carved depiction of a text on the hem of a kilt or garment (Tokovinine 2012:fig. 33). 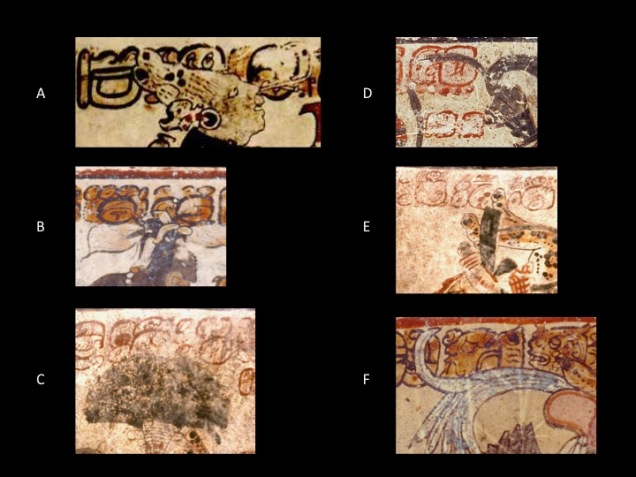 The examples on “codex-style” vases are far more sparing, with a very slight degree of occlusion (Figure 7). What intrigues us in both traditions of painting is that, at least notionally, the glyphs lie behind the figures depicted on these vases. There is no foregrounding of explanatory texts or captions. They are exactly the opposite of Mayuy’s framed, out-of-sight bodies. His carvings stress the clear exposition of texts over bodies; these paintings emphasize bodies and image over the text.

A final example was drawn to my attention by Bryan Just (Figure 8). Found on the base of the carving of an Itzam or Old god (Martin 2016), it illustrates a novel attitude about attending to what the eye can see, not what needs to be literally and fully present for maximum legibility (see also Houston 2015:fig. 13.5). The text is one of the first known sculptor’s signatures, as well as the first labeling of a carving’s patron. But there is a striking oddity. The carving was not finished where an eye would be unable to see it while the object rested on a surface. This game of illusion, of implying rather than showing, of fascination with situated viewing, seems aesthetic but not only that: it suggests discussion about the nature of sight itself and how it might enlist active and knowledgeable minds. By breaking the fourth wall, it burrows equally into the heart. 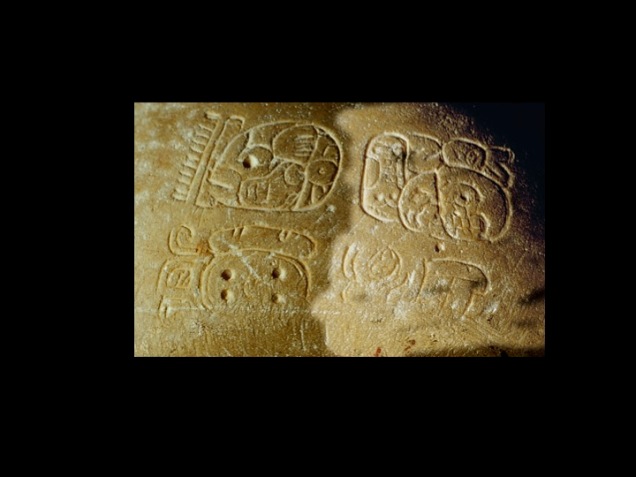 Acknowledgements   My best thanks go to Basile Baudez for drawing my attention to the image from India and its source, and to Bryan Just and David Stuart for discussion of glyphic overlay and illusionism. Justin Kerr offered all his customary generosity with rollout photographs.

[Note 1]  Free-standing sculptures, as at Copan and Tonina, are categorically different. As single figures, they rely on viewers to address the carving or to admire an eternally frozen dance, perhaps to speak with this proxy of royal or captive bodies. There is no frame to separate viewers, and a punctured (or non-existent?) fourth wall becomes central to their function. Compelling a kind of interaction, the images cannot be complete without it.

Miller, Mary, and Claudia Brittenham. 2013. The Spectacle of the Late Maya Court: Reflections on the Murals of Bonampak. University of Texas Press, Austin; INAH and CONACULTA, Mexico City.