Coming in July 2013 from The University of Texas Press

The Spectacle of the Late Maya Court: Reflections on the Murals of Bonampak
by Mary Ellen Miller and Claudia Brittenham

The blurb from The University of Texas Press website:

Located within the deep tropical rainforest of Chiapas, Mexico, the Maya site of Bonampak is home to the most complete and magnificent mural program of the ancient Americas. In three rooms, a pageant of rulership opens up, scene by scene, like pages of an ancient Maya book. Painted c. AD 800, the murals of Bonampak reveal a complex and multifaceted view of the ancient Maya at the end of their splendor during the last days of the Classic era. Members of the royal court engage in rituals and perform human sacrifice, dance in extravagant costumes and strip the clothing from fallen captives, acknowledge foreign nobles, and receive abundant tribute. The murals are a powerful and sophisticated reflection on the spectacle of courtly life and the nature of artistic practice, a window onto a world that could not know its doomed future.

This major new study of the paintings of Bonampak incorporates insights from decades of art historical, epigraphic, and technical investigation of the murals, framing questions about artistic conception, facture, narrative, performance, and politics. Lavishly illustrated, this book assembles thorough documentation of the Bonampak mural program, from historical photographs of the paintings—some never before published—to new full-color reconstructions by artist Heather Hurst, recipient of a MacArthur award, and Leonard Ashby. The book also includes a catalog of photographs, infrared images, and line drawings of the murals, as well as images of all the glyphic texts, which are published in their entirety for the first time. Written in an engaging style that invites both specialists and general readers alike, this book will stand as the definitive presentation of the paintings for years to come.

Ordering information can be found at the The University of Texas Press.

Precolumbia Mesoweb Press has just published Maya Archaeology 2, a beautifully illustrated volume with important contributions on the archaeology and epigraphy of Calakmul and Palenque. Authors of the included reports and articles are Ramón Carrasco Vargas, María Cordeiro Baqueiro, Simon Martin, Arnoldo González Cruz, Guillermo Bernal Romero, and David Stuart. The book will be available May 2013, and order information is now available here through the Mesoweb website. 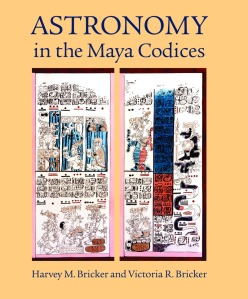 The Precolumbian Maya were closely attuned to the movements of the Sun and Moon, the stars and planets. Their rituals and daily tasks were performed according to a timetable established by these celestial bodies, based on a highly comples calendar system. Agriculture provided the foundation for their civilization, and the skies served as a kind of farmer’s almanac for when to plant and when to harvest. In this remarkable volume, noted Maya scholars Harvey Bricker and Victoria Bricker offer invaluable insight into the complex world of the Precolumbian Maya, and in particular the amazing achievements of Maya astronomy, as revealed in the Maya codices, the indigenous hieroglyphic books written before the Spanish Conquest. This far-reaching study confirms that, independent of the Old World traditions that gave rise to modern Western astronomy, the Precolumbian Maya achieved a sophisticated knowledge of astronomy based on observations recorded over centuries.

“Astronomy in the Maya Codices is the first thorough treatise on the codices since Thompson’s A Commentary on the Dresden Codex four decades ago. The Brickers’ work is special in that it gives a complete account of the historical background of scholarly inquiries into each of the instruments they deal with. The Brickers attempt to place each codical instrument in real time, an approach they uniquely develop and fully justify. This work will remain the ‘last word’ on the role of astronomy in the codices and in Maya thought for a long time to come.”
Anthony F. Aveni
Russell Colgate Distinguished University Professor of Astronomy and
Anthropology and Native American Studies
Colgate University

“Astronomy in the Maya Codices represents a compilation of almost three decades of scholarly research conducted by the Brickers, reflecting a unique collaboration that combines their respective areas of expertise in linguistics, epigraphy, and astronomy. Their book is the most comprehensive treatment of the Maya codices to date, and is likely to remain a classic for years to come.”
Susan Milbrath
Curator of Latin American Art and Archaeology
Florida Museum of Natural History

“Astronomy in the Maya Codices is simply a tour de force. The breadth and depth of Harvey and Victoria Bricker’s research on the Maya codices and the accessibility of their writing style make this important book a ‘must read’ for a host of constituencies, from scholars of the Maya to astronomers to the interested general public.”
Jeremy A. Sabloff
President, Santa Fe Institute

My old friend and colleague Ian Graham has just published his new auto-biography, a must-read for all Mayanists and Maya enthusiasts. The Road to Ruins is published by the University of New Mexico Press and can be purchased here at Amazon.com. 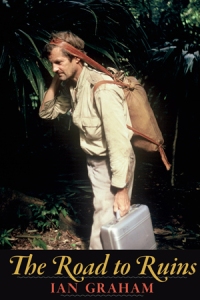 A book launch will be held in Cambridge at the Peabody Museum on March 27.

This lively memoir chronicles Graham’s career as the “last explorer” and a fierce advocate for the protection and preservation of Maya sites and monuments across Mexico, Guatemala, and Belize. It’s full of adventure and high society, for the self-deprecating Graham has traveled in wonderful company and tells entertaining stories about his encounters with Rudyard Kipling, a family friend from Graham’s childhood.

Born in 1923 into an aristocratic family descended from Oliver Cromwell, Ian Graham was educated at Winchester, Cambridge, and Trinity College, Dublin. His career in Mesoamerican archaeology can be said to have begun in 1959 when on a trip to the U.S., he turned south in his Rolls and began traveling through the Maya lowlands photographing ruins. He has worked as an artist, cartographer, and photographer, and has mapped and documented inscriptions at hundreds of Maya sites, persevering under rugged field field conditions.

Graham is best known as the founding director of the Corpus of Maya Hieroglyphic Inscriptions Program at the Peabody Museum of Archaeology and Ethnology, Harvard University. He was awarded a MacArthur Foundation “genius grant” in 1981, and dedicatedly remained the Maya Corpus program director until his retirement in 2004.

Graham’s careful recording of Maya inscriptions are often credited with making the deciphering of Maya hieroglyphics possible. But it is the romance of his work and the graceful conversational style of his writing that make this autobiography must reading not just for Mayanists but for anyone with a taste for the adventure of archaeology.

Ian Graham currently lives in England. In addition to the many volumes of his Corpus of Maya Hieroglyphic Inscriptions, he is the author of a biography of the early Mayanist Sir Alfred Maudslay.

Seems the whole “end of the world in 2012” brouhaha is stirring again with the upcoming release of the special effects disaster film, 2012. While topics on this blog are often meant to be pretty scholarly and technical, I thought it useful to offer a simple run-down of important points about what the ancient Maya really had to say — or not — about the “end” of their calendar.

No it doesn’t. What will happen is a recurrence, an anniversary of sorts, of a key mythological date in the distant past. The Maya wrote this as 13.0.0.0.0 in their “Long Count” calendar (an abbreviation of a much bigger number), which fell on August 11, 3114 B.C. (some correlations of the two calendars say August 13, but I don’t really care). This “creation date” was not the beginning of everything, however. Maya mythological texts tell us that plenty was happening long, long before this starting point of the current era. On December 21, 2012 (some say December 23) we come again to a numerological recurrence of 13.0.0.0.0. The Long Count calendar continues well beyond this date, too. In fact, the numerology of the calendar demands that there will be other similar recurrences of this same date in the far distant future, on a scale of octillions of years. The scale of Maya time reckoning dwarfs anything in our own cosmology by many orders of magnitude.

They actually said very little, if anything. Only one ancient inscription refers to the upcoming 13.0.0.0.0 date in 2012, from a now destroyed site named Tortuguero. The question we scholars have struggled with is whether the final few hieroglyphs of that text describe anything about what will happen. A few years ago I put forward a very tentative and incomplete reading of these damaged glyphs, including a possible use of a verb meaning “descend” and a name of a god, Bolon Yokte’. Much of it was iffy and remains so; I’m not sure I believe much of what I wrote back then. More recently my colleague Steve Houston has pointed out the glyphs may not even pertain to that date anyway. So there’s considerable ambiguity just in the reading of the glyphs and the rhetorical structure of the Tortuguero passage. What we can say with confidence is that the ancient Maya left no clear or definite record about 2012 and its significance. There is certainly no ancient claim that the world or any part of it will come to an end.

Who came up with this crazy idea?

New Age hacks and, now, Hollywood producers. The idea can be traced largely back to the novelist and mystic named Frank Waters, who in the 1960s and 70s wrote a number of novels and cultural treatises on Native Americans of the American southwest, including his 1963 work, Book of the Hopi (he was not an anthropologist). One of Waters’ last works was Mexico Mystique: The Coming Sixth Age of Consciousness (1975), an odd pastiche of Aztec and Maya philosophies wherein he proposed that the “end” of the calendar would somehow involve a transformation of world spiritual awareness. Waters’ ideas got picked up and expanded upon by Jose Arguelles in his insanely misguided but influential book The Mayan Factor: Path Beyond Technology (1987). Many different writers have followed with their own strange books and essays on the “meaning” of 2012, mostly contradicting one another.

What about the astronomy?

The Maya were fine astronomers, but the 2012 date has little if anything to do with astronomy. Despite claims about the appearance of a “galactic alignment” in late December three years from now, modern scientific astronomers reject this notion pretty much out of hand. Besides, no ancient Maya text or artwork makes reference to anything of the kind.

What do the present-day Maya have to say about 2012?

Although the 260-day round of the ancient calendar system survived in a few areas of highland Guatemala, the 2012 date has nothing to do with it. It’s only associated with the Long Count, which ceased being used well before the conquest. So, any mention of 2012 by modern Maya peoples is probably an example of media or New Age influence.

So, in sum, what’s been widely circulated in the popular imagination about 2012 has little to do about true ancient Maya belief or notions of prophecy.

My brief comments will probably instigate even more endless 2012 discussion and debate, but I respectfully request that such exchanges be taken elsewhere. What more I have to say on the subject, mostly on the nature of the ancient calendar as a whole, will appear in my upcoming book about Maya time, appearing sometime next year.

Maya Decipherment is a weblog devoted to ideas and developments in ancient Maya epigraphy and related fields. We welcome contributions and the participation of colleagues and students from around the world. For more details, please look at the "About" page.